A famous painting in Art History everyone should know: "Starry Night"

In today’s article about a famous painting in Art history you should know, we are going to talk about “Starry Night”. Maybe the title does not sound familiar to you but I’m sure that you’ll recognize this very well-known masterpiece: 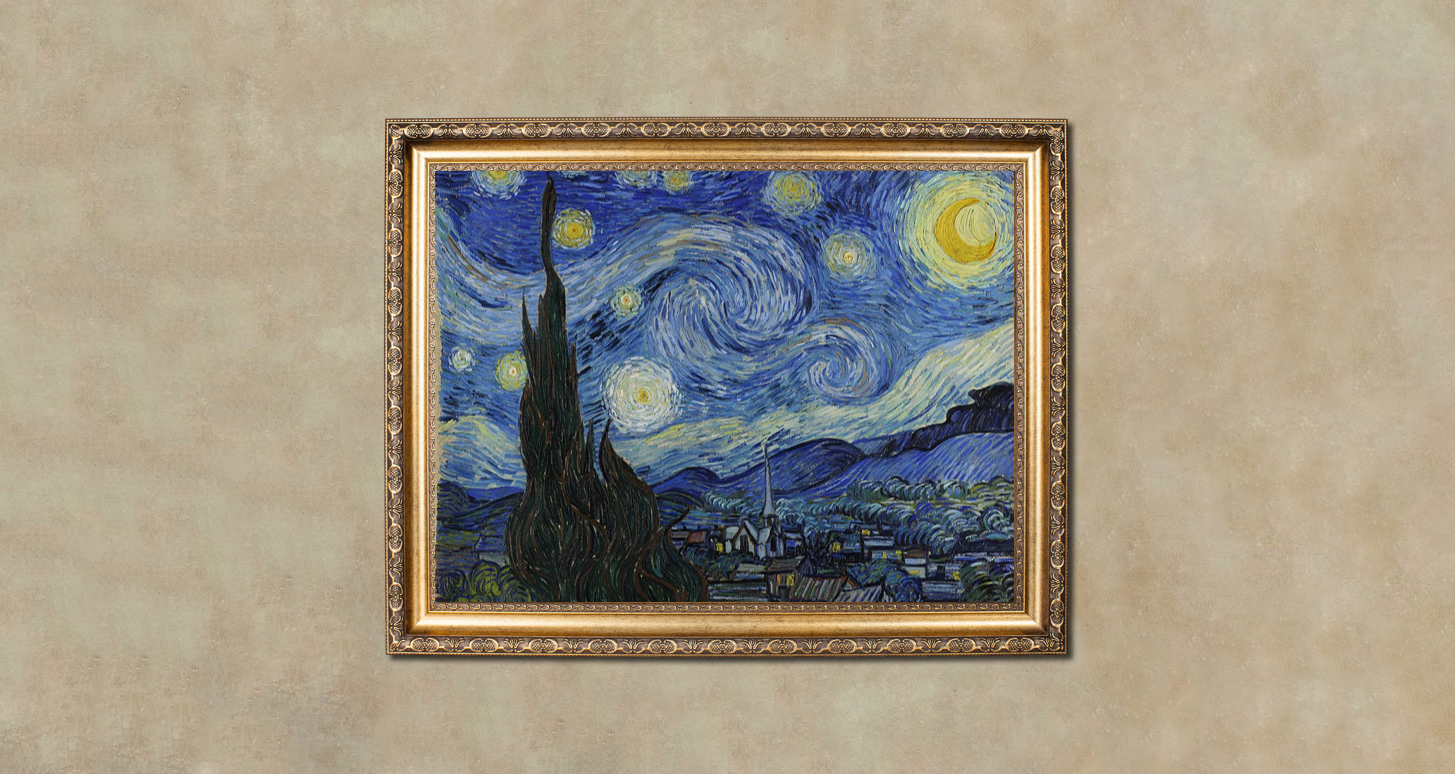 Created by the Dutch painter Vincent van Gogh in 1889, the Starry Night depicts the landscape seen from a room in the mental asylum at Saint-Remy where the painter was recovering from his mental illness and his ear amputation.

An asylum… so another tormented artist?

In fact, Vincent van Gogh was known for suffering from psychotic episodes, the famous story about his ear amputation during a fight with his friend Gauguin made him one of the most renowned painters in the world. However, during his lifetime Vincent van Gogh did not get any recognition for his work; he was considered more of a failure and madman instead of the brilliant painter that everybody respects today. People started talking about him and his work only after the sad man killed himself…  becoming the “misunderstood genius”, the artist “where discourses on madness and creativity converge”, and a figure of the “tortured artist”.

Nowadays the Starry Night is the most notorious masterpieces of van Gogh even though he confessed during his lifetime in a letter he wrote to his brother, expressing his disappointment in the painting’s final result and deemed it a failure. The painter was known for having a fascination with nature which he likes to personify (like his painting “Twelve Sunflowers”).

He wrote in one of his letters:

“Painters understand nature and love it, and teach us to see”.

The Starry Night apparently states an inner subjective expression of van Gogh’s response to nature when, early in the morning, he saw the morning stars through the window of his bedroom. But that is not all, the painting is a mix between his direct observation but also his memories: the steeple of the church is for example inspired by his native country Holland, whilst the construction of the sky depicts . Vincent had a particular interest for the night which for him was “much more alive and richly colored than the day”. The night was probably also a peaceful moment allowing the tormented artist to express his creativity. In fact, remember that he painted this landscape from his asylum bedroom (which is probably not the place on earth) but still the painting expresses a kind of serenity.

Well lucky him, I have never seen such a beautiful sky!

The sky depicted is indeed particularly shiny and represents the main part of the painting. The artist composed a sky full of swirls, tourbillons, and breathtaking stars. After some research, it appears that the dominant star that we can see on the right of the cypress tree is actually Venus which was, at that time, nearly as bright as possible. The moon is stylized but astrological records confirmed that it actually was waning at the time van Gogh completed his work. The authenticity of such a starry night has been the subject of much research but one French astrophysicist, Jean-Pierre Luminet, confirmed with evidence that the depicted sky was in accordance the celestial map on 25th of May 1889 at 4:40 am. Super precise.

Real or not, this iconic starry sky became an inspiration in pop-culture for a lot of contemporary artists: they reinterpreted the Starry Night adding icons of pop culture like cartoon characters and famous landmarks like the Eiffel Tower or the Golden Gate Bridge. But Starry Night is also represented on much more common objects in our everyday life like mugs, socks, tee-shirt, magnets, etc.

Since 1941, Starry Night is part of the permanent collection of the MoMA (Museum of Modern Art) in New-York City. Fascinated by nature, Vincent van Gogh created more than 2000 oil paintings, watercolors, drawings, and sketches based around the theme. He tried to express his emotional and psychological responses to the world through bold colors and expressive images. This starry sky was a recurrent aspect in the painter’s work, which we can confirm in his fellow works like "Starry Night over the Rhone" and "Cafe Terrace on the Place du Forum."

Have you ever thought about starting your own Art collection?